Going back to the 1890s through the 1920s and even later you will find that most fans were designed to be run at voltages from 100-115 volts but you might encounter other voltages; 6, 30, 32, 50, 60, 100, 104, 110, 115, 220, or another voltage.,.  Today's house voltage is very close to 120 volts so, while you probably can plug an early AC current fan into your house current with no consequences for short or longer term running, better results can be achieved by using a "Variac" or variable AC current transformer. Some fans have a given range to operate over such as 100-110v. or 111-120v. as you will see on later Westinghouse "tanks".  Manufacturers often recommended that the fans be operated within the rated voltage + or - about 5%.  In practice I think most fans can handle much lower voltages but keeping in mind that fans using centrifugal starting switches must have the supplied voltage kept safely above the "cut-in" speed of the start switch.
o
Before plugging in an old fan first note what the voltage and type of current the fan is designed to operate on.  The current will be either AC (alternating current like your house current) or DC (direct current which was once common but is rarely used today in the home for appliances).  Fans run by a battery are DC fans.  Do not connect a fan to a current type it is not designed to be run on to avoid damage to the fan motor.
o
If you have a DC fan you can still run it from your house current but you will need to connect a small and inexpensive BRIDGE RECTIFIER between the house current and the fan.  This will change the AC current to a rough form of DC that the DC fan motor can run off of.  In addition, a Variac may be needed to decrease the AC voltage to the fan's rated voltage or less.  The Variac will be in the circuit BEFORE the bridge rectifier.
o
If your fan has an AC motor the only thing you might want to change is to lower the voltage to what the fan was designed to run on or even a lower voltage to run the fan slower and quieter.  This is where the Variac comes in handy.  Most Variacs are rated for 120 volts in and 0-140 volts out.  If you fan is rated at 104 volts for instance, set the Variac to that voltage.  From there you can decrease the voltage to where the fan still runs well on high and does not stall out.  The fan should also be able to start from OFF at this lower voltage.  If not you should increase the voltage to one that the fan will start up on.  Set the fan speed switch on HIGH speed when using a Variac. 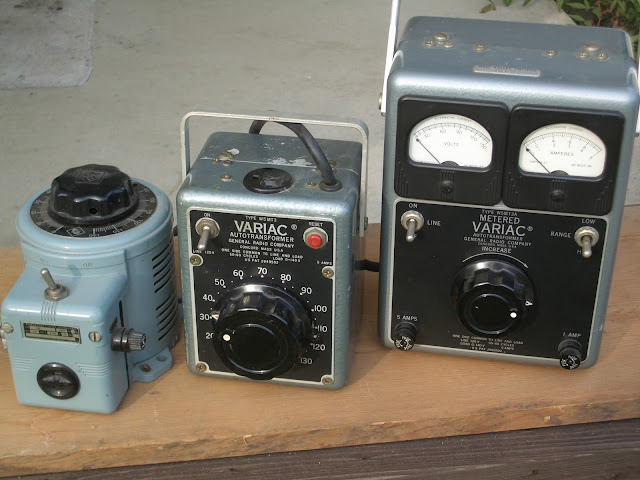 The two Variacs on the left, above are ones you are likely to come across.  From left to right:  10 Amp Powerstat Type 116B (the similar but earlier Type 116 is 7.5 A.) made by the Superior Electric Co. in Bristol, Conn.,  5 Amp Variac brand (the original) made by General Radio Co., Concord, Mass.; 5 Amp metered Variac.  These probably all date from the 1960s or a little later.  There are a few other brands made in the USA as well as plenty of chinese made "variacs".  I like the quality of the older US brands.  The Variac came in 5 and 10 amp versions as well as larger.  The Powerstat came in 7-1/2 and 10 amp versions, possibly others.  You can find these on ebay or at some swap meets, fan meets, radio swap meets, etc.  The 5 amp. size is entirely adequate to run a couple of desk fans.  Prices can be from $20 to $100 or more.   Plug in an incandescent lamp to check to see that there is a smoothly increasing output at all points of dial rotation.


I plug a fan into the outlet of the Variac then turn down the output voltage until the fan runs at a slower speed to my liking.   I find that some of my 104 to 110 volt fans run very well and quietly around 90-95 volts.  If you want more breeze just turn up the voltage toward the rated voltage.
o
CAUTION:  When using a Variac to run a fan or motor that has a centrifugal start switch which is common on many of the earlier fans be sure to not run the motor at a slower speed that will cause the start switch to engage.  That will energize the start winding which is not meant for constant running and cause the start winding to burn out.  Please familiarize yourself with what a Variac can and cannot do and adhere to proper operating proceedures.  If you don't know what is correct please ask someone who is an expert.

Watts is just volts X amps. Divide the watts by the volts, and you get amps!
If a fan uses, say, 75W, it needs 75W/120V, or .625 amps. To accomplish the same amount of "work" at 6V, would require 75W/6V, or 12.5 amps! This assumes that the fans motors are the same efficiency.
I usually use a regular transformer & rectifier on such low voltage fans.

I would like to emphasize a point about dimmers...
Do NOT use a light dimmer for a fan.
PLEASE spend the extra couple of bucks for a real "fan" speed control.
>>>> There are differences! <<<<<
LIGHT DIMMER: $ 5-10 (Do not use for a fan)
(Solid state phase angle firing of a triac) It can be a rotary switch or a push-off, push-on type, or slider. The push switch type can be turned on at low. (may not run a fan motor properly) The rotary type switches on at low and increases to bright. (same problem, may not trigger properly Does NOT have a minimum level adjustment control. (This is a very important feature)
OK, so what's this "may not run a fan motor properly" hoopla?? Without getting into more theory than you would probably want to know, suffice it to say that solid state controls are real sensitive to line voltage and differences in load variations. If the voltage jumps around because of the air conditioner kicking on, etc. or flipping on or off a lamp on the same branch circuit. It may cause the dimmer to kick off, or worse, half cycle which sends half wave rectified DC to your AC motor....Not Good...Toast. (Ever notice how they say on the package "for incandescent use only"?) (Light bulbs don't care what you feed them they just average the power)
When you start a dimmer on high, then reduce the speed, you can go to a lower setting, than if you started the dimmer at the lowest setting and increased it slowly, it would start running abruptly at a higher speed. It's kind of like the flywheel effect in that the motor windings kick some voltage back to the dimmer that helps to keep "triggering" it. (If that makes any sense.) If the motor is not running initially, it takes more to trigger it.
Bottom line is DON'T use a light dimmer to control a fan.

DE-HUMMER CONTROL: $10-15
These are actually a selector switch with a bank of AC capacitors that are placed in combinations of series and parallel circuits to vary the capacitance in series with the fan motor. This results in slowing the fan down by limiting the current to the motor with different values of capacitance. They usually have about four speed settings. All the capacitor type controls I've seen are rated at 1.5 amps. They seem to work well for ceiling fans, but may only work well for 8, 10, and maybe 12" desk fans. (depends on motor, etc.) The capacitance values in the de-hummer and the motor must be pretty well matched to get the results you desire.... (They were made for ceiling fan motors with lots of poles and momentum) Too small a capacitance and motor might not start turning on its own. Too much cap. and fan runs too fast at the controls lowest setting. Too big, or powerful a motor, and maybe only one or two slower speeds will keep fan running. A too small, efficient motor and maybe the lowest speed is still too fast. A capacitor type control is very efficient if properly matched to the motor.

RHEOSTAT: $20-100
Rheostats need to be fairly large and give off heat and need to be mounted in some sort of enclosure to allow heat to escape. They are made by winding nichrome wire around a round ceramic form. They have a knob adjustment that slides a carbon brush over the nichrome to adjust the resistance. The rheostat consumes the energy not diverted to the motor and gives off the energy in the form of heat. The power used to run the motor at high speed is the same amount used at low speed except now the rheostat gets hot. Rheostats must get sized bigger for more powerful motors. Rheostats are rated in ohms and watts and need to be sized for the motor you want to control. Rheostats are not readily available anymore, and not recommended except for ones that were bought with the fan they were made to control. Rheostats are the least efficient control.

Best:  VARIAC, POWERSTAT, VARIABLE AUTOTRANSFORMER: $40-100
Variacs, Powerstats (brand names) are actually a variable autotransformer. They are made by wrapping copper wire around a laminated steel donut. They have a knob adjustment that slides a carbon brush over the transformer winding that gives an output voltage from 0 to 140 volts AC. Just like the extra 20 volt boost (140 volt) certain models can be wired for 120 volt input and 0 through 280 volt output. (Like a step-up transformer) Variacs are heavy and usually sit on a table or floor. They are sized for the voltages they will be used for and how many amps they can supply. The smallest ones are about the size of your fist and handle 1 amp loads. The larger ones can be as large as a basketball, weigh 80 pounds and can handle 30 amp loads. I would recommend one with a 3 to 10 amp capacity based on what you can get for the price. New Variacs can cost $200+ but used ones average about $50. Variacs are very efficient.

IN SUMMARY:
A Variac will give you the best consistent results controlling fan speeds for all fan types, but they are large and heavy, cost about $50 used. The next best thing is a fan dimmer, or speed control meant for use with fans and has a minimum speed adjustment. They cost about $10 Next would be a capacitor type "de-hummer" control and it gives you about 3 usable speeds, if the control & fan are matched. Cost about $10.
I hope this information helps.
John McComas  (used by permission 11-27-11)