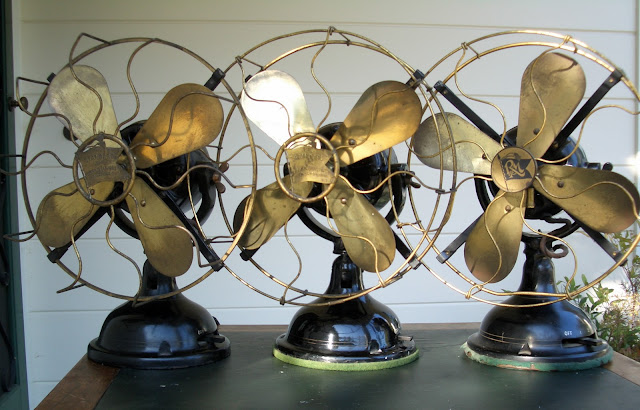 Left to right are the original 1911 model (one of my favorite fans and often a daily user) with a guard using a square back ring.  This is the same cage used on later production versions of the R&M "lollipop" fan.  An early lollipop fan is shown below.  For 1912 the guard of the 1404 was changed to a two ring cage using a round wire back ring and the same common flag cage badge that R&M had already been using for a few years.  For the final few years of the 1404 the List No. became 14040 and was, basically, the same fan as the 1404 but with a felt covered base plate.  The last year of production was actually after R&M introduced their new drawn steel fan motors for 1916 and appears to have had a cage with the new, smaller solid cage badge as shown on the right of the photo above.   The fan on the right has its original felt on the base.  All three fans have their original paint, finish on the brass, and head wires.

Was the 14040 continued in production for a year or more after the stamped steel motor modles came out or am I seeing the result of some cage substitutions?  I have found some new information from the Toronto, Canada The Electrical News, below, that shows the old cast iron R&M fans were sold alongside the new 1916 stamped steel models.  This would account for the small round badge on the latest List 1404 models.  It appears that the 12" and 16" fans for 1916, both the old cast iron models and new stamped steel models, used the old flag badge while only the smaller (stamped steel) fans used the new round solid cage badge.  1917 models, both iron and steel had the newer round cage badge and a brass cage.   For 1918 and possibly 1919 R&M's larger fans had a wrapped steel cage followed by a welded steel cage c.1920.

Robbins & Myers was one of the oldest fan companies, having begun the manufacture of direct current ceiling fans in 1897 in Springfield, Ohio under the ownership of Chandler Robbins and James Myers.  Direct current desk fans were added in 1899.  After acquiring a patent from Charles Eck for an oscillating fan mechanism, R&M put into production their unique DC "lollipop" oscillator in 1904, followed a few years later by an AC version.  A sheet brass disk in front of the fan was acted upon by the air from the fan causing the fan to oscillate back and forth.  Stops on the base of the fan were contacted by a pin at the bottom of the lollipop shaft to shift the disc to the other side, resulting in the fan oscillating to the other side.

R&M had been making only direct current fans until 1908 when their first AC fans were introduced.  Their new 12" and 16" AC fans were made by Westinghouse and re-badged for R&M.  They were virtually identical to the Westinghouse "tank" fans but with the R&M open flag cage badge.  With Westinghouse's impending introduction of a new drawn steel fan motor in 1912 it is likely that R&M found it would no longer have a source of AC fan motors, prompting them to design their own AC fan motor, the "List 1404" and varients.

The 1404 did away with the mechanical start switch of the previous R&M AC fans made by Westinghouse.  The 1404 incorporated three speeds with a good speed separation between high and medium and medium and low.  They also run pretty quietly and are an easy fan to live with for daily use. 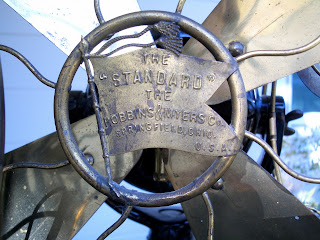 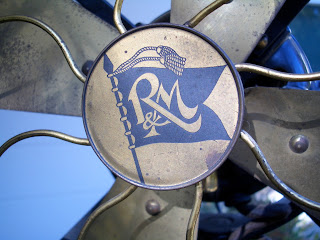 Robbins & Myers motor tags from the 1911-1917 era have little information on them; the "List No." (the first two digits are the "model number") and the voltage and frequency, as well as direct or alternating current.  That is all you got- no serial numbers or patent dates or other information was included.  If there were patents pending they never were on the motor tags of these fans as an actual date. 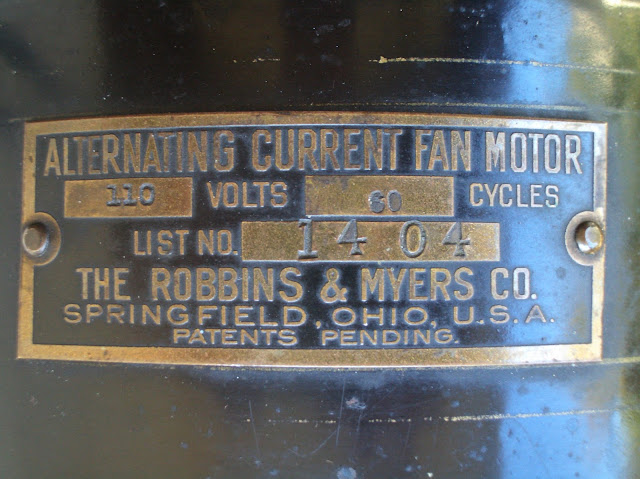 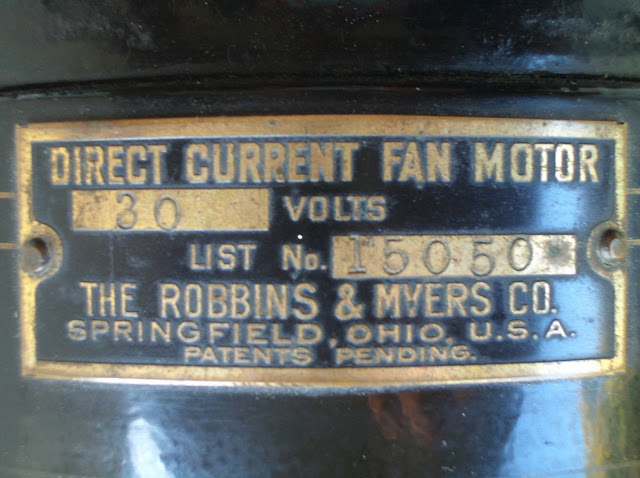 Most information for R&M fans is hard to come by.  I have not seen any catalogs of their earlier fans so that I might see what voltages and frequencies they made fans for or the other models that were made in this series of the Models 14 and 15. 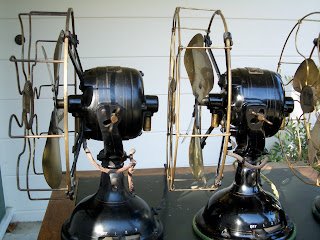 Right:  The 1911 1404 on the left in the photo and the c.1915 14040 on the right.  Not too many fan makers pin striped their fans but R&M was one who did well into the 1920s.  Usually a pair of double stripes was used, hand applied, around both the motor and the base.  A single stripe was applied to the sides of the trunnion.   R&M's finish was second to none in this period and their black japan finish was very durable.  It can usually be cleaned up using acetone and a rag and Q-tips with no harm to the japan.  That finish is really tough!

Click on photos in the blog to see a larger version. 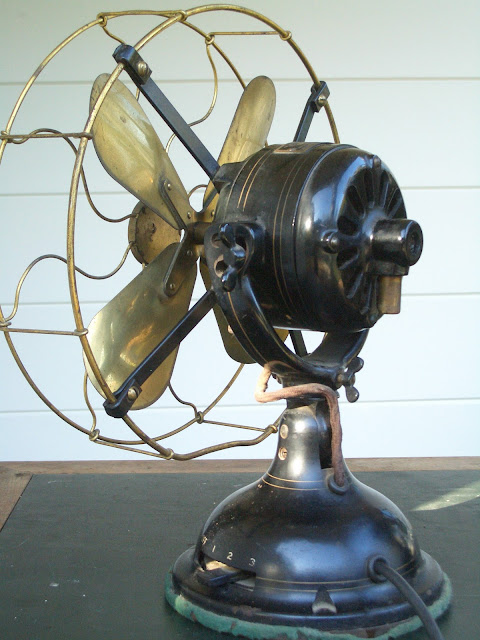 There are two wing bolts on these fans.  Here you can see them both painted black; one for the tilt adjustment on the left upper side of the trunnion and a smaller wing bolt, also painted black on this fan, at the bottom center of the trunnion to adjust for side to side position of the fan. The tilt adjustment must be the easiest to use and most secure locking of any fan ever made.  A wonderful design of a simple part.

What is unusual to me is that a brass wing bolt should indicate that the bolt is made of brass and, one would think, a black painted wing bolt would indicate an iron wing bolt.  Also, one would think that brass is earlier and iron is later.  The 1911 model has both wing bolts of lacquered brass.  On the newest fan discussed here, the one with the small, solid cage badge, the large wing bolt is steel but the small one is brass, painted black.  The fan in the center of the first photo and the DC fan both have a brass large bolt but a black steel small bolt.  Such minor details are not uncommon for old fans.  The companies probably used what they had on hand. 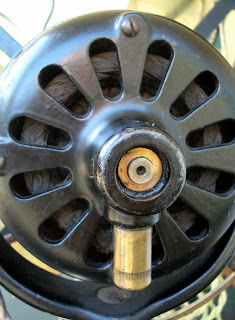 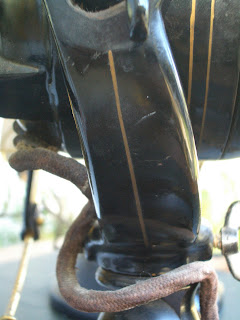 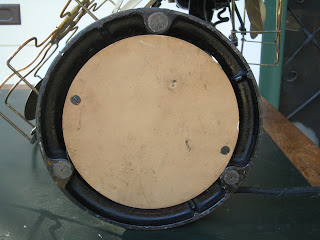 Rear bearing caps or covers were never used on these fans.  On the earlier models without the felt base plate a tan fiber cover was screwed to the base which helped to protect the switch and wiring.  Three rubber feet protected the surface the fan was placed on.

Below are comparison photos of the early (1911) cage with square back ring and the later cages with the two round rings.  The double ring cages only differed among the years used (1912-1917) by having the smaller solid badge on the 1917 cages. 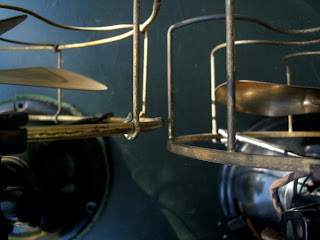 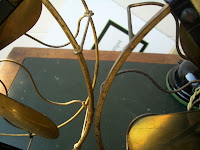 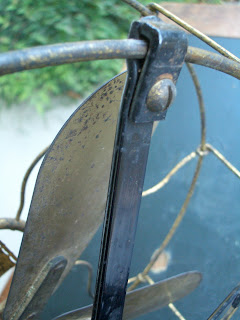 Some photos, below, of the 30 volt Direct Current, List 15050 fan.  After some cleaning of the commutator and brushes and lubricating the oil cups, this fan runs very well.  I connect the power cord to my variac to reduce the voltage to 30 volts or less and plug it into a power strip socket in which I have installed a bridge rectifier which gives a close approximation of direct current voltage.  The bridge rectifiers are small, about $4 each, and are easy to hook up.  They can be installed inside the base of most early fans if there is room in the base and the fan can then be plugged into a regular house wall outlet. 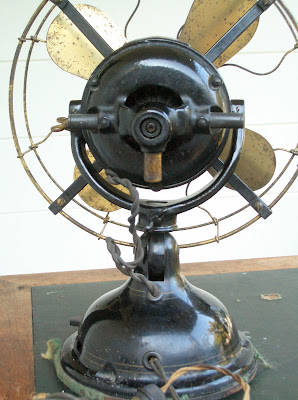 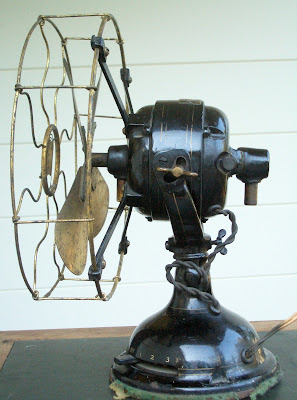 While the base of the DC models is the same (the switch is not the same) the motor is larger in diameter and deeper, with different construction.   I would say the DC has a better looking motor than the AC versions.  The tubes sticking out from the rear sides of the motor are the brush holders.  Earlier versions differ somewhat in having a screw-on knurled cap.

There were no typical two prong plugs as we know them today until about 1917.  Instead fans and other electrical appliances used "attachment plugs" as shown below allowing the fan to be connected to a light socket.  In the nineteen teens wall outlets began to be installed in buildings but the attachment plugs persisted into the 1930s, by then separable from a standard two prong plug. 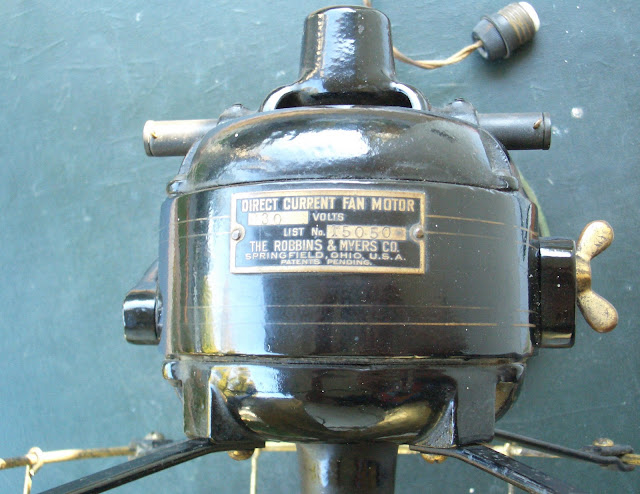 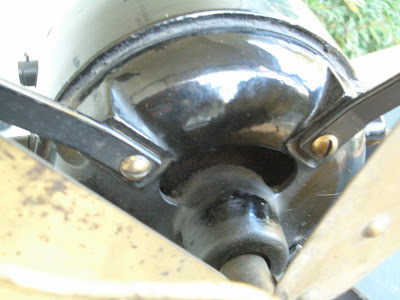 Oil cups are made of brass and have spring loaded felt wicks in them to wick oil to the bearings.  20 wt. non-detergent is the proper oil to use on old fans. 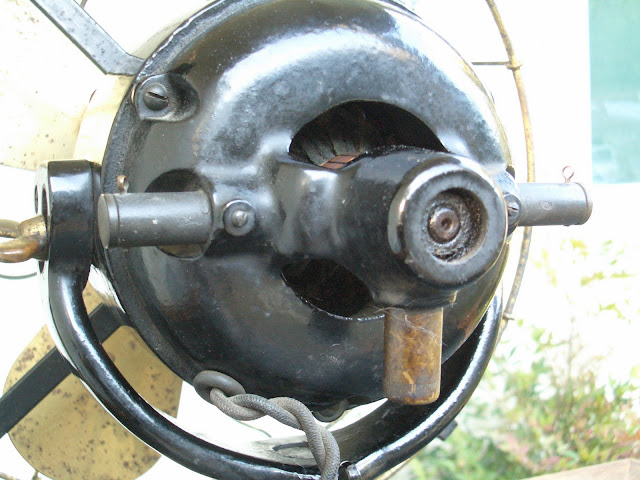 What about rarity and availability of these R&M fans?  I would say they are a bit uncommon but not too hard to find.   Certainly they are much less common than even the 1902-07 GE pancakes, or the GE "Big Motor Yoke" and "Small Motor Yoke" models of about the same period.  DC models are fairly rare and hard to find which makes sense since Direct Current power disappeard for the most part from our country fairly early.  I bet a lot of DC fans met their fate in the scrap drives of the two world wars.


Thanks goes to a noted collector of R&M fans for providing me with this scan of an R&M catalog page for the 1911 year List 1404 series of fans.
The only numbers I have encountered are the List 1404 and 1411 fans for the common 110 volt 60 cycle current. 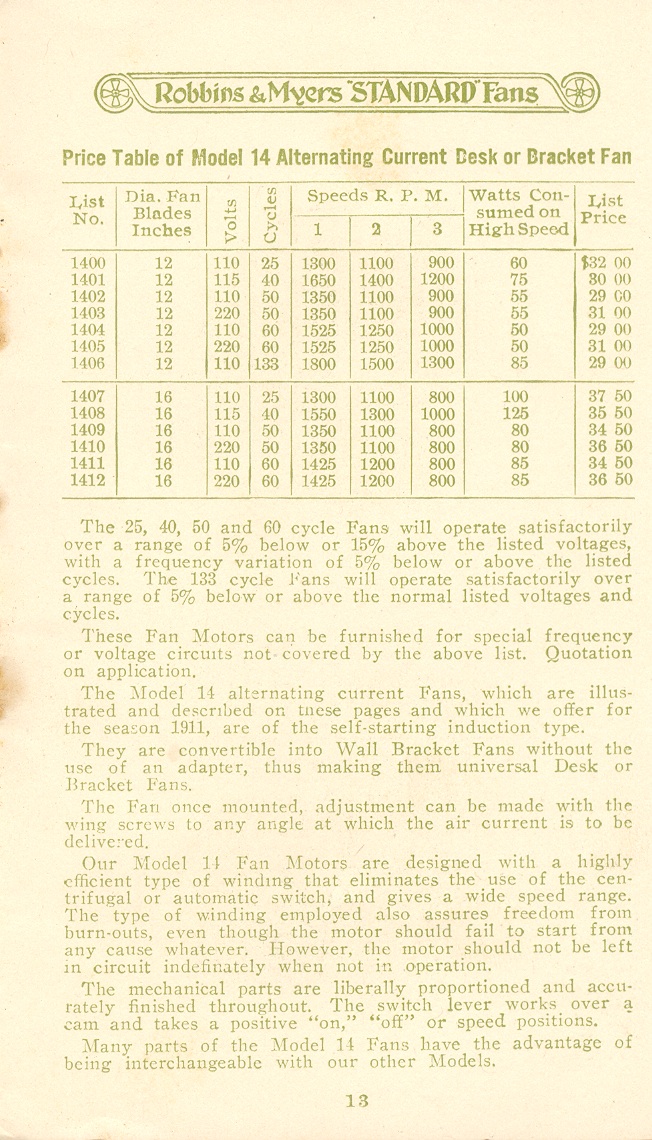 What came after the List 1404 and other CAST IRON R&M fans?

Up until 1916 all R&M desk fans were made of cast iron.  Beginning in 1916 R&M had new designs made of drawn steel, a feature that Westinghouse pioneered for the 1912 model year.  It appears that the cast iron models were still available for a year or two after 1916 but, predominately, their fans would be of the new pressed steel construction.

For several years the 12" and 16" fans were available only with 6 blades.  A brass cage was used on 1916-17 fans with a change to wrapped steel cages for one or two years more before the cages went to welded steel.   Before the welded steel cages appeared the four blade fans returned and the 6 blade may have been discontinued.  As R&M information is hard to come by I will leave it at this for now until I can update the details.
Pictured at left is a 1916 R&M 6 wing oscillating Model 24 (List 2404).  This is probably the last year for the large, open flag cage badge to be used and followed in 1917 by the smaller, solid, round flag cage badge, still on a brass cage and with a 6 wing blade. 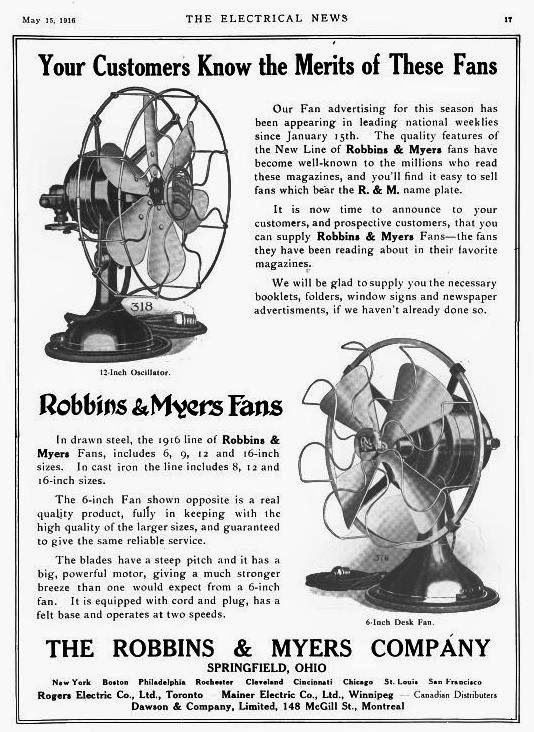 8-24-16
R&M Flag cage badges- new reproductions:
Often the original cage badge is missing from early R&M fans.  It was a thin stamped sheet brass "flag" as you see pictured in this blog.   Fortunately for those who have a missing badge, which is a very common occurrence, AFCA member Darryl Hudson makes excellent die stamped reproductions that are nearly impossible to tell from the originals.  Darryl made a run of flag badges then ran out. Fortunately he did made another batch around 2014 and I think they are still available.  If you need a badge don't dally, they may sell out again and you don't know if they will be made again.  Darryl does excellent work.  He makes the badges in the original thickness of .010 and the same in a thicker and slightly more durable 0.015" thickness for the same price of $40.00 each plus shipping.   That's a bargain for the quality and intricateness of his badges. 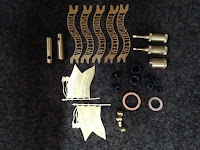 Above:  Darryl had dies made to stamp out new R&M cage badges.  Quality
is excellent with relief on both sides as per the originals. 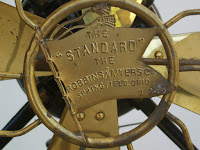 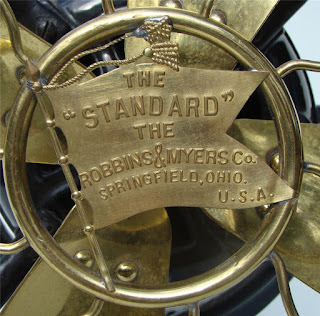 Left:  Darryl Hudson reproduction R&M cage badge that has seen some use and had one corner bent some.  What you get form him are perfect and an unpolished bright brass.  Above right; original R&M cage badge with original "dipped and lacquered" finish.    Blades were highly polished and lacquered but not on cages or badges.


Here is a brand new Darryl Hudson reproduction as you will receive them showing the front and the back sides.   Click on any photo to enlarge; two clicks to supersize on many photos. 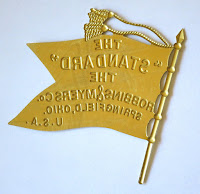 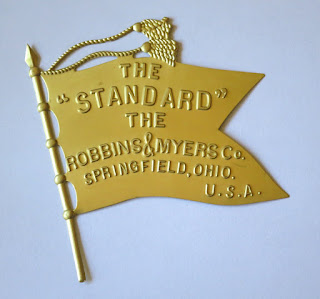