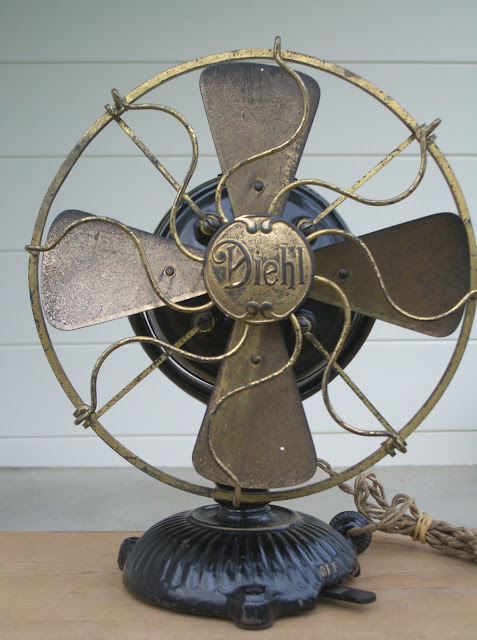 A favorite of many fan collectors, these hard to find, early "ornate base" Diehl desk fans are a superb creation.  This particular 9" model was made c.1906, has its original finish and, as the title says, weighs a very hefty 15 pounds possibly making it the heaviest small desk fan ever.  That is 5 pounds heavier than the Emerson 8" Type 1500 of 1909 and 4 lbs. over Emerson's 9" 19645 of 1914, both top grade Emerson desk fans. 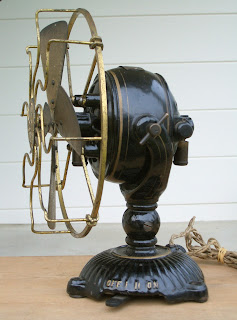 Left: The side view shows the pleasing proportions of the fan.  Pin striping was not used on too many early fans but these model Diehls had it in abundance and both a wide and narrow stripe.  The nice "T" bolt on one side of the trunnion is a nice touch that allows the motor to be tilted forward or backward then locked into place.

This fan is a three speed, DC fan and runs absolutely perfectly with good speed separation.  There is little extra room, if any, to allow for mounting a rectifier under the base to allow the fan to be plugged into AC current.  That is easily rectified by putting a rectifier inline with the power cord and taping it to the cord. 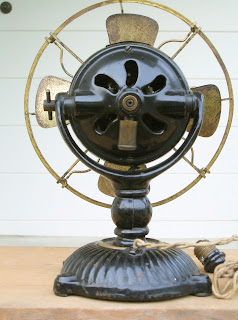 Right:  The rear of the fan is as attractive as the rest of it.  Brush caps are made of what looks to be wood.  Lubrication is by front and rear oil cups with an unusual feature on fans; a small opening on top of the front and rear bearing housings that allows one to add oil to the bearings directly.  I don't know why this was done since a filling of the oil cups will last a long time.

The 9" Diehl desk fan was discontinued for the 1909 model year and replaced with a similar 8" model. 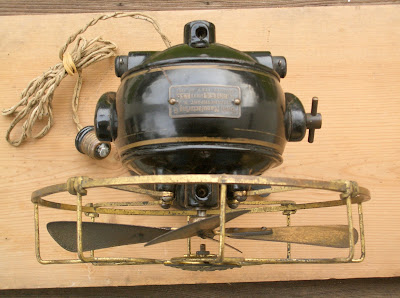 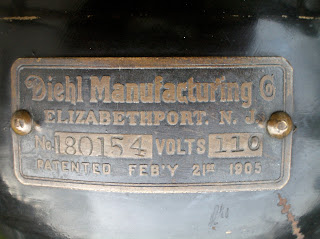 Serial No. 180154.  Due to the rarity of these (and most Diehl) fans the number may have been sequential beginning with Diehls' earliest fans, the first direct drive ceiling fan of 1887. 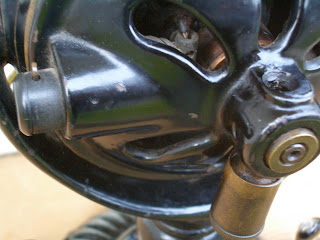 Right:  Note the small well on top of the bearing housing which allows addition of oil directly to the bearing.  No cap also would allow dirt to enter.  Brush cap on the left is made of wood.

Remember that clicking on most photos in the blog will enlarge them.  Then hit the "back" button to return to the main page. 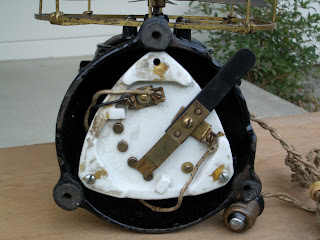 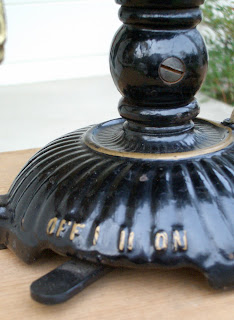 Above and right:  The very earliest of the ornate Diehl fans had a fiber switch, soon replaced with a porcelain switch.  Though the switch markings cast into the base seem to show only two speeds (I and II) the fan has three speeds and runs smoothly and quietly with a nice spread of speeds between the settings.  The screw on the base will allow the fan to be changed to a bracket (wall mounted) fan simply by loosening the screw, rotating the two halves of the ball joint 90 degrees, then retightening the screw.  A pin inside one part of the ball joint engages a hole in the opposite part to lock the joint in place.  Pat. No.782,816  Feb 21, 1905 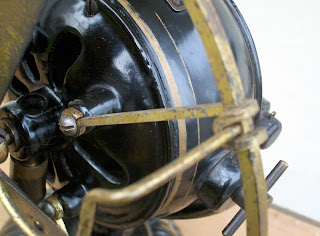 Left:  The first of the ornate Diehl desk fans used a unique square wire cage strut which wraps around the rear cage ring as well as an "S" wire.  Making a reproduction of these would be a difficult task.  Later versions used the more commonly seen flat cage strut as was common with most other fan makers. 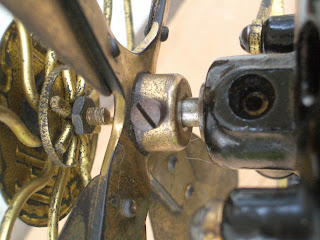 Left:  A good view of the oil ports above the bearings.  Oil can be added here although the oil cups under the bearings will keep the bearings oiled for a long time.  The cage badge is attached to the center of the cage with a nut to hold the threaded stud that is soldered to the badge.  If the nut comes loose the badge is likely to fall off and become lost. 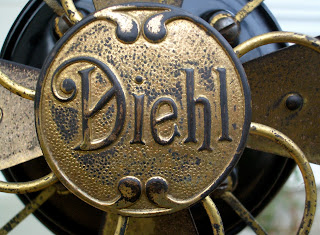 Right:  The finish on the brass on this fan was not polished but was coated with a gilt finish as shown on the badge.  The blades may have been polished but time has taken its toll on much of the finish. Cage, badge, and struts were definitely not polished.  Being as how I like unmolested early fans with their original finishes, the finish on this fn is just perfect for my taste.