For so many years of fan collecting I wondered it I would ever own a truly OLD fan.  At the Antique Fan Collectors Association's annual FANFAIR in 2009 there were several members with impressive displays of early fans.  One fan that caught my attentions was this 1/12 HP (horsepower) Crocker-Wheeler made in New York c.1892.  I commented to the owner "if you ever decide to sell that fan I would love to buy it".  He surprised me with a reply: "give me a few weeks to think about it; I have a duplicate and may be selling this one".  Wow!  Great news and he did end up selling me the fan.  Now I had my first very early fan made with no protective cage around the blade or "fan" as the early blades were referred to.  The motor was called a "fan motor", the blade was the "fan" and the whole contraption was called a "fan outfit".
o
This is how my Crocker-Wheeler looked when I bought it.  More photos will be added as the fan comes together into a working fan.   Added 2-26-15, see below 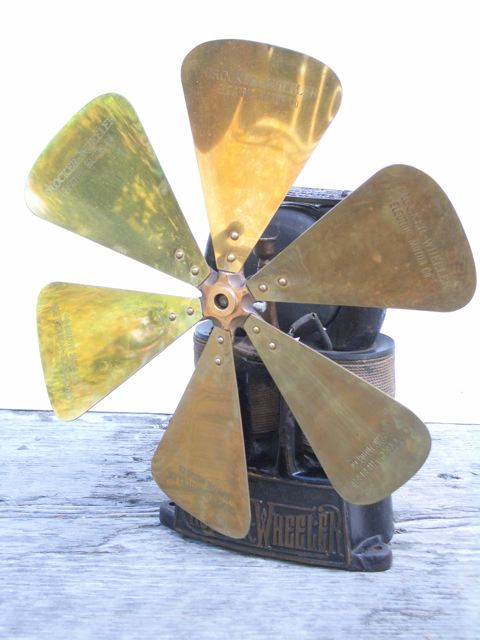 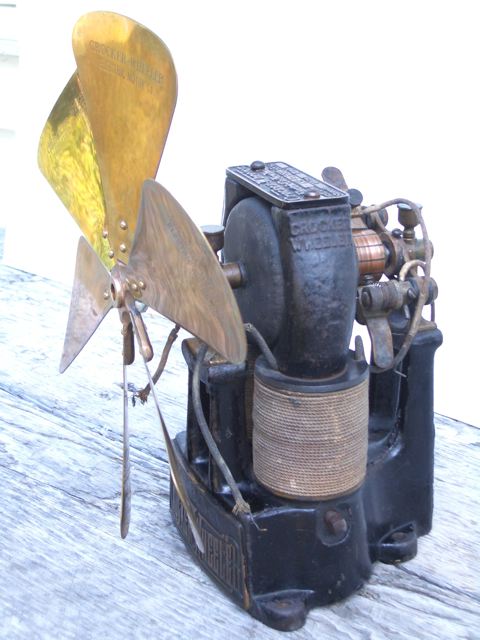 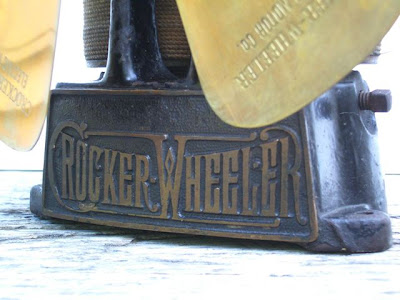 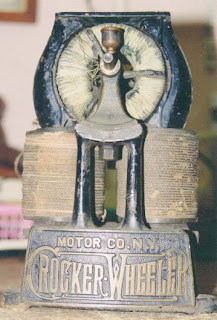 Photo above, left (from AFCA gallery) shows an earlier (No. 3461) fan motor sporting what may be an earlier Crocker-Wheeler plaque on the front of the base with the added MOTOR CO. N.Y. that my plaque (No. 4901) does not have. 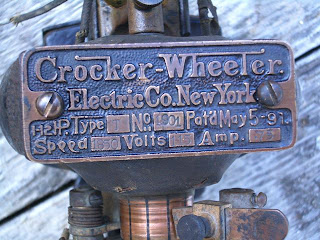 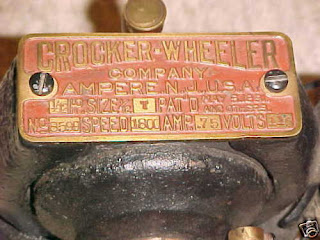 My new Crocker Wheeler did not run.  I found out that the switch was missing and the blade a reproduction used on the larger 1/6 HP model Crocker Wheeler.  A friend who is very knowledgeable and a genius on early fan restoration and repair supplied me with an original switch that mounts to the side of the motor and he is in the process of building me a proper blade.  He also got the fan running briefly so we know that it works.   I am looking forward to getting the fan completed and running as it is supposed to. 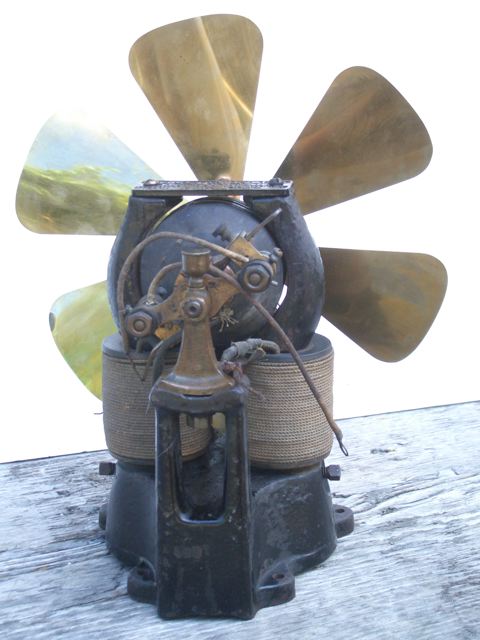 Updated 2-27-15 with new photos below.
Below are some photos of my same Crocker Wheeler as shown above but now with a newly made "fan" fabricated as an exact duplicate of the fan used on these 1/12 HP C-W outfits.  The blade (I'll revert to the more commonly known term for the fan blade) that came with the fan was a copy but of the one used on the large motored 1/6 HP C-W.   Now my fan has the proper blade and blade hub and each blade wing has been STAMPED, as original, with CROCKER WHEELER MOTOR CO.   The previous blade on the fan had the name engraved in to the wings, not how it was done originally.  I wanted the new blade to have a patina to match the overall patina on the motor and think it comes pretty close.

Another addition to my C-W is an original switch mounted to the side of the motor.  This give two speeds, fast and slow, with a knife switch operated by turning the serrated knob.   Power is fed to the fan by connecting 115 V. DC to the two large wing nuts on the switch assembly.   I run the fan using a variac to sightly reduce the voltage and a bridge rectifier inline with the power cord to change the AC to DC current.  Now with an antique power cord the fan runs smoothly and quietly.   Click photos for full size. 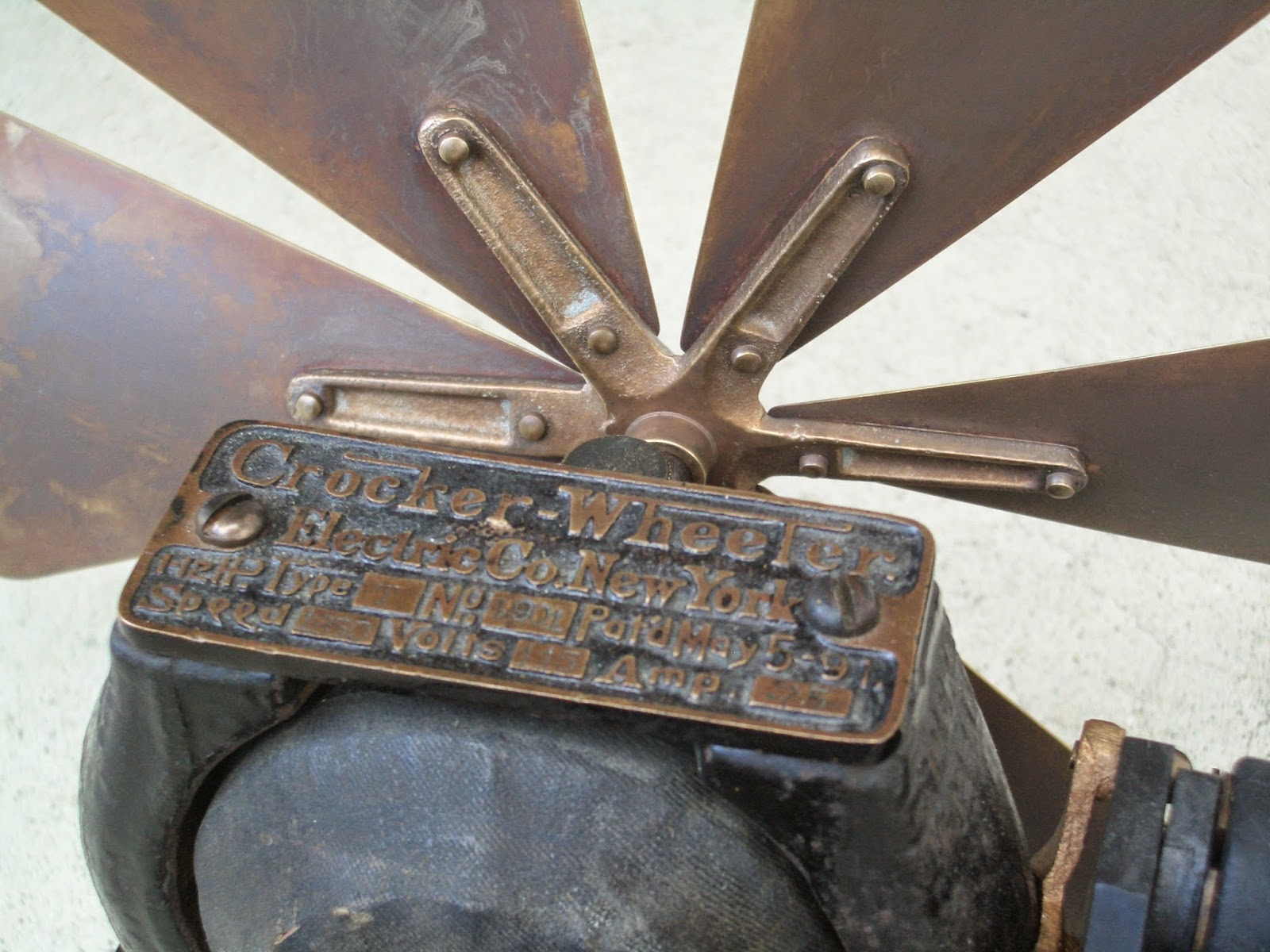 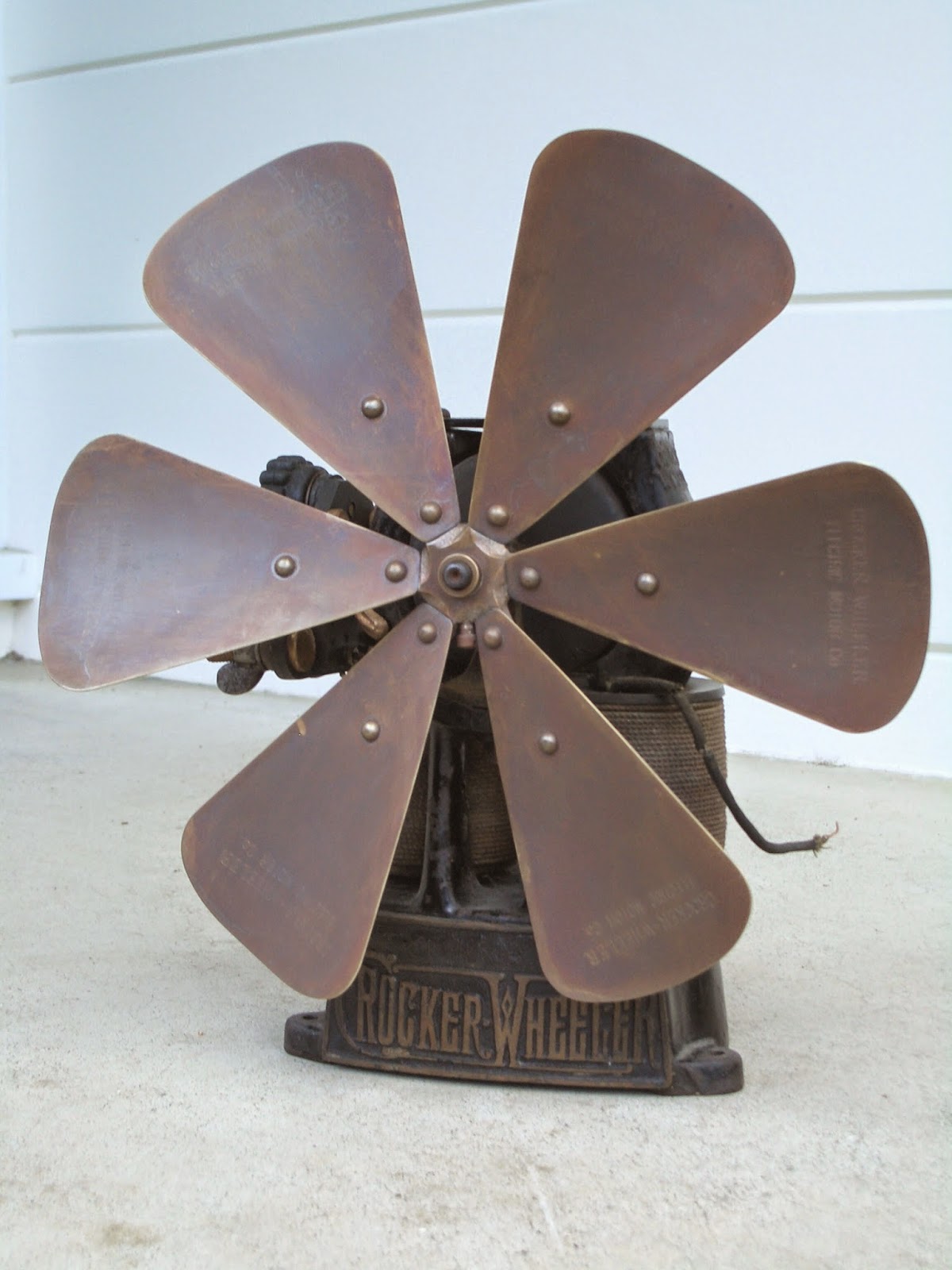 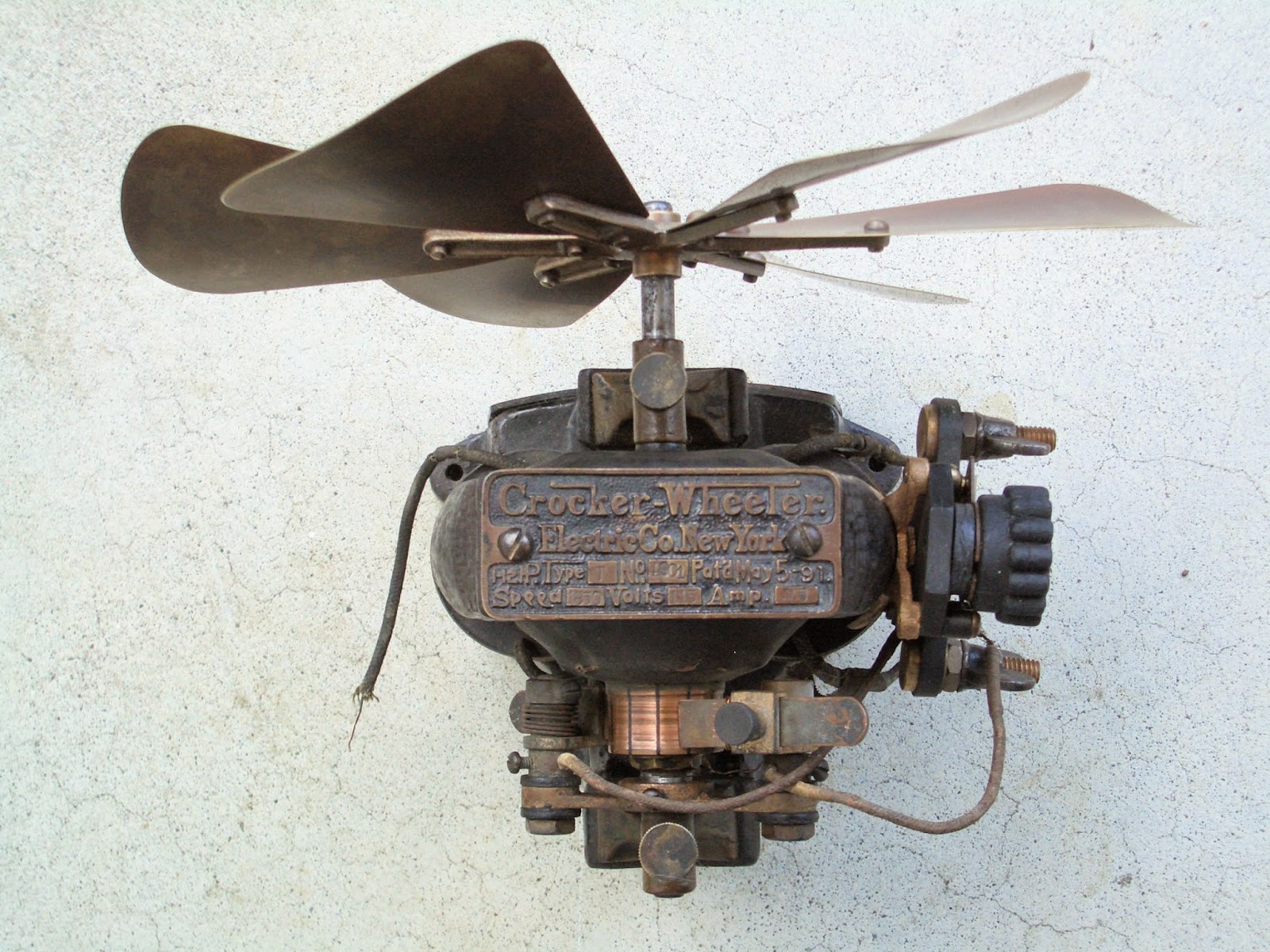 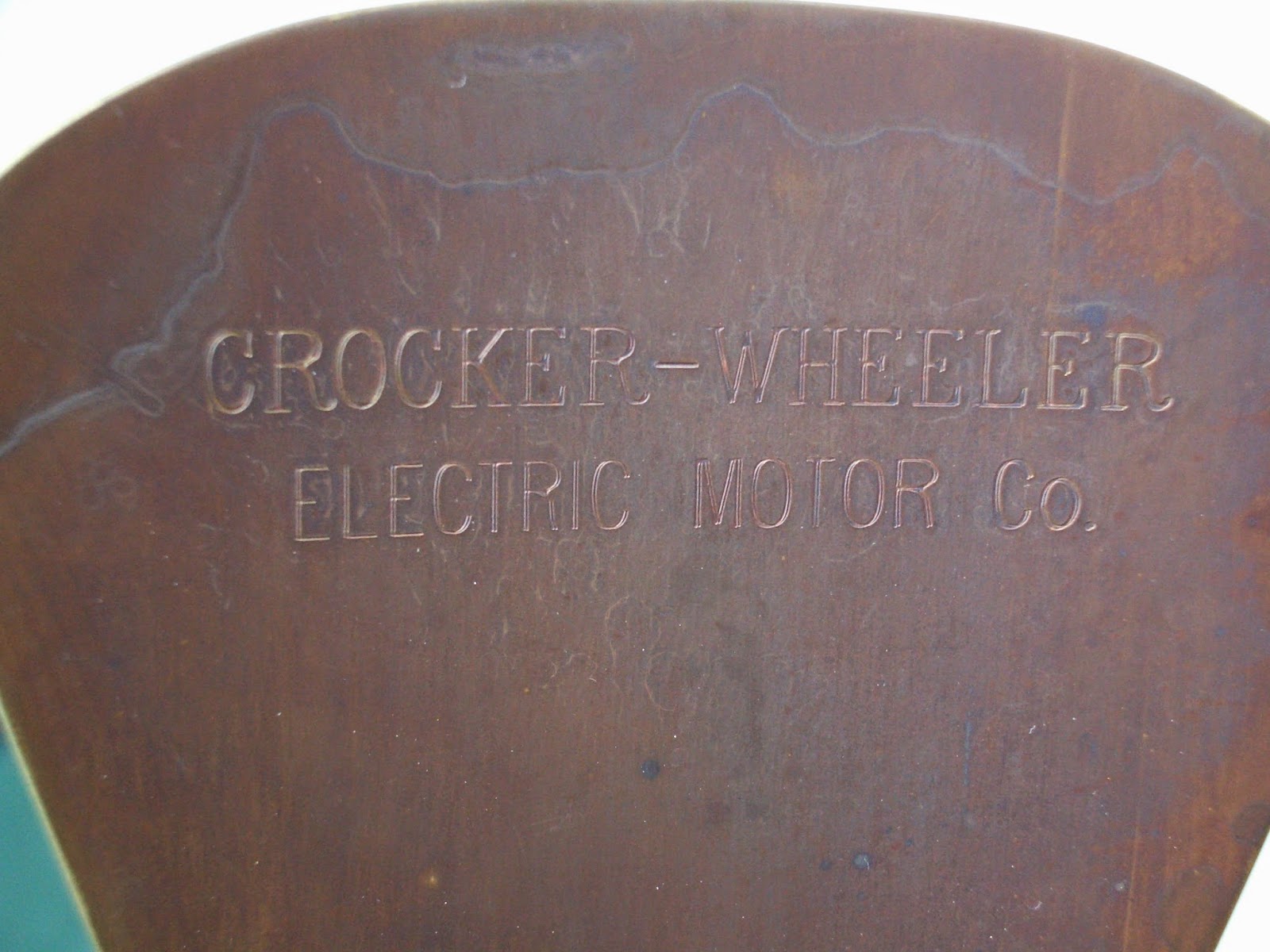 Photo below shows what the two speed switch, mounted on the side of the motor, looks like.  This particular fan motor sold on ebay but had its original fan still with it.  The light socket on top had been added; none of these Crocker-Wheeler fans had a light bulb. 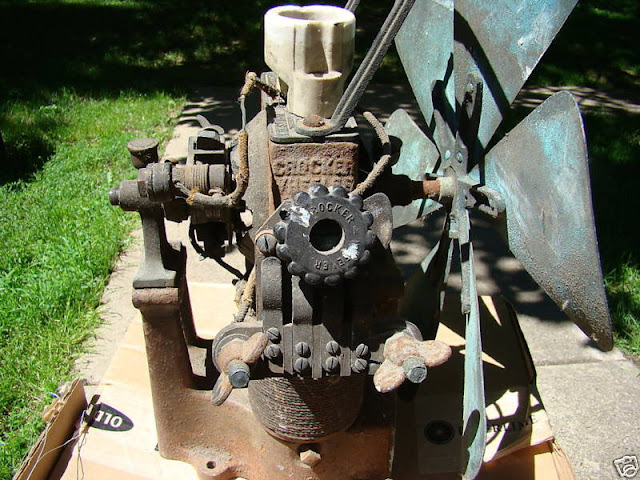